Malaysia is a divine land of several ethnic groups and religions that formulated over the past centuries.
It is only sensible to think that a country with this diversity has a great platform of arts and music and dances.
Malaysian dances can be identified with certain regions or religious practices which are performed in festive
celebrations, wedding parties, cultural shows, religious ceremonies and other public events. We have cited
some of the traditional Malaysian dances and music.

Malay dance
The dance vividly shows the customs of the Malayan true nature and life style.  The dances are divided in to
two main categories; the original which depicts Malay region and highlights the characteristics of Sumatra,
Malay Peninsula, Singapore, the Riau Archipelago and Borneo. The other category is the adopted which is i
nfluenced by foreign cultures due political and historical events; the dance is well known for its beats and rhythm.

There are four basic genres of Malay dance. Asli which occurred in the 14th century hold a complicated and
defined rhythms. The dance style is delicate and elegant examples of Asli songs include; Sembaua Balik,
Pasir Roboh, Timang Banjar. Inang is also a dance that portrays a lady waiting for responsible for royal children;
it was created during the era of Malaccan Sultanate in 1488 and dancers tend to perform it at weddings.
The dance is performed on fast rhythm and only ladies were only allowed to dance on it in the past.
The last type of Malay dance is Joget was created in the 16th century and originated from two popular
Portuguese folk dances, the Boranjo and the Farapeirra; the dance has a catchy beat and a cheerful
combination of movements.

Malay Music
There are two types of two traditional orchestras, the Gamelan and Nobat which plays lilting melodies as it
uses an ensemble of gong-percussion and stringed instruments is considered a royal orchestra that plays a
more solemn music. Another type of special Malaysian music is Kompang which is one of the most prominent
traditional instrument used in a variety of social occasions such as national day parades and official functions
and weddings. The hand drum used is played in large ensembles where various rhythmic compose patterns
and produce several layers of rhythms. 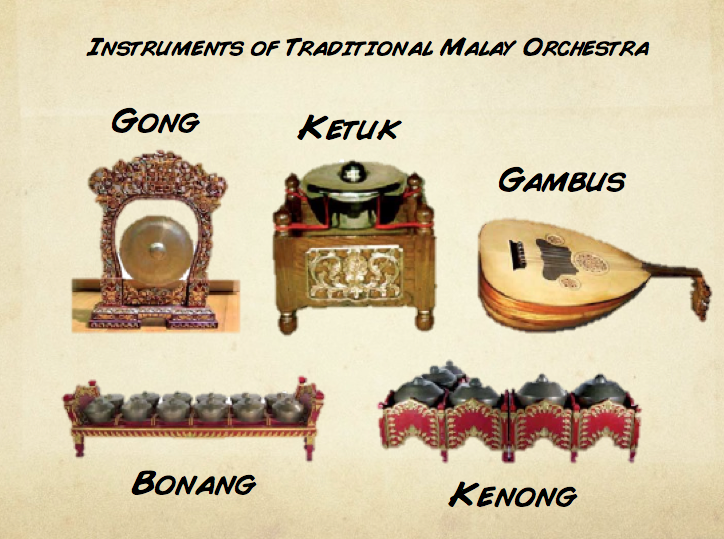